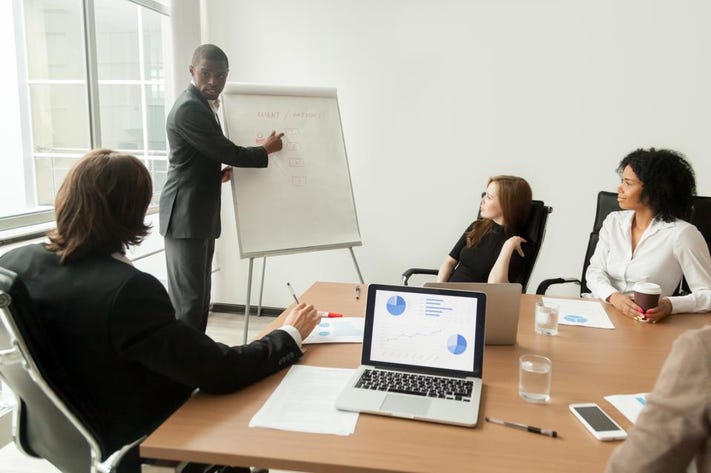 It takes time to have a strong bond within the team. It requires lots of energy, time, commitment, and resources for the team to be efficient and effective. The team starts producing results after a while and after trying and failing. Even for English Premier Leagues, grinding results does not come cheap. There are lots of sacrifices. The rondo, rondo and rondo style being played by teams like Barcelona and Manchester City is not achieved in a day. It requires various combinations, discipline, focus, resilient and right attitude. In a log of 20 teams, there is always one that is at the top of the league and one at the bottom.

Coaching a team to victory and the leadership of a successful business have many similar attributes to how sports is managed. It is not about just the team, but the dynamics between individual players and how they work together.

Best assembled teams go through various phases of development. They do not just wake up and start grinding results. It does not work that way. A lot of effort must be put in place. Even very popular rugby teams do not gel overnight. Team dynamics issues must be dealt with. When the team is in place, even the old one, elements of mistrust will always prevail. That is the reason why even eagles do not taste before they understand the partner. This might justify why the Manchester United Captain uttered last week that he feels more comfortable to partner the person who understands premier league dynamics. Such statements are uttered after assessing what is around you. It is about trust which is built over time. Rugby Players in big clubs like Zimbabwe (the sables); South Africa (the Springboks), New Zealand (the All Blacks), Italy, (Les Tricolores or Les Bleus, Australia (the Wallabies), just to mention a few, take time to gel. It requires lots of coaching to get together well.

The “All Blacks” have even innovated and implemented the Haka to frighten their opponents before a big match. This is something the team practices after coaching. The rituals have been perfected over the time and now it is part of their culture. The team does not feel good if they do not implement the Haka before the game. It is now part of their bonding culture. They weaken the opponent even before the match. This is coaching at its best. Coaching that does not bring the needed results is useless. Coaching for impact is about instilling sense of discipline, belonging and self-sustenance performance culture which create value for stakeholders. With a game of rugby, one must be very strong, agile, has speed, has sharp vision, quick thinking, and can maneuver even in difficult situations. Organizations can get key lessons from the game of sport.

Some matches have been lost due to poor communication. If the forwards do not know what the backs are doing, and vice versa, the whole team breaks down and they are likely to lose the match. It is the same with business. Leaders need to make themselves heard and understood by everyone. However, effective communication is not just about one person talking: listening is key. Leaders need to listen to their teams, allow them to influence decisions, and encourage them to become part of the process. Leadership coaching plays an important role in ensuring that information flow in the organization is flawless. The organization should not thrive on gossip. Unblock all areas which have potential to create a hive of rumour mongering. What is generally perceived as gossip may end up spreading like veld fire. Leaders should watch out for such signs. Leadership Coaching plays a critical role in this regard. Where there is a deliberate coaching program, effective communication can be enhanced in the business.

In a game of sport, a good captain, like a leader will show, not tell. Leaders need to do the same. Leaders should give due credit, collaborate with colleagues, should not hold unnecessary meetings with no agenda, be punctual, have a work-life balance. Every day meetings affect productivity. As people spend lots of time in meetings, execution is compromised. Besides, too many meetings breed meeting-fatigue in the business. Through shaping good behaviour, leaders can set their expectations for the rest of the group and alignment becomes easy.

We all pick good and bad habits during our employment journey. What is important is to unlearn bad habits and absorb good habits. In any game of sport including rugby, it might be a predisposition to come in from the side at a ruck, or not releasing the ball quite as quickly as you should. In soccer, it might be a question of holding on to the ball more than necessary and only pass when the gaps have been closed. In business, it could be micro-management, or an unwillingness to show weakness. Leaders should learn from the past and their own experiences, but they should be open to new ideas. Learn from the team around you and be willing to change your mindset. No one has monopoly of knowledge, but it is from leadership coaching which allows all of us to share knowledge with our colleagues.

Regular training is also important-Train, train, and train again. Top professional players do not stop training just because they are at the top. This should be the case for leadership teams, too. There is always something new to learn in business – everyone, no matter their level, should embrace these opportunities as they arise. Networking is a key ingredient in training. In coaching, leaders are encouraged to network, so that there is sharing of knowledge, experience, and best practices.

Lesson number 4-Understand how to find your leaders.

In any organization, there are two different types of leaders – those who are leaders by virtue of their position (such as the captain or your management team) and those who are leaders by virtue of who they are. Influencers are not necessarily at the top of the corporate ladder. Your informal leaders may not have anyone reporting to them, but they are probably liked and trusted by the rest of the team. Such people are a hub of information and influence. They will know what is going on in the organization, and they will have an opinion about it. Any leader needs to engage these informal leaders as ambassadors. With their buy-in, you will spread your messages much further than simply using a top-down approach. Leadership coaching helps to identify such individuals and get the best out of them.

Leadership coaching tells us how to navigate in difficult and different approaches. No single strategy just like in a game of sport can assist the team to win the matches. Every game has different approaches. There is no single approach to situations. Different situations call for different objectives. In a game, it may be as simple as “you need to get the ball to the back of the net”. This is however different from Barcelona and Manchester City who, over and above scoring fantastic goals, they entertain the spectators. In business, success depends on everyone in the team understanding what the goal is, and how they play a part in the result. When the organization sets clear expectations – what is a win, what is a failure, who is responsible for what, what is in scope, how can we do things better – you will ensure the team works together in the same direction. With leadership coaching, leaders can go higher and very far. Rallying the team towards common goal is mission critical.

In conclusion, leaders can learn a lot from game of sports. If the lessons articulated above are executed, the organization will not be the same. Organizations need to inculcate coaching culture as part of their strategic agenda. We all need coaches and mentors. Do you have one?

Dr Phil Chitagu is the current IPMZ President and writes in his own capacity.